I agree...and...The 'NOTES' left in response to this article lead to some interesting add-ons to the practice of asking "Why?" five times to get to the root of any problem.

see: To Get To The Root Of A Hard Problem, Just Ask “Why” Five Times. Written by: Eric Ries at Co.DESIGN / fastcodesign.com.

Charting the answers in some kind of diagram linking root causes explored to each question helps me to see where I've been with my querying quest.  Others point out that five "whys" may not be enough.

When you are faced with a design problem of any kind at your library, keep drilling down to the source of the problem until you see the underlying reason for your dilemma.  Only when you know why you have a problem, will you be able to explore how you may fix it.

image as per article credits.-Tx.

reading signs in your library

Visual impacts of your sign design can not be underestimated. 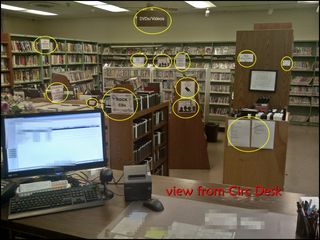 Signs set the tone and style of your library as much as the design affects your users.

Signs, their readability , quality and consistency of design will always be a primary interest of mine and I urge you to make it yours as well.  People do make up an opinion of you at first glance and they will do the same when they walk into your library.

The premier quality of an effective sign is readability. If a sign cannot be read sufficiently from a distance to allow time to read it, then the message it carries is silenced.

As a general rule the Greatest Impact Readable Distance is 10 feet for every 1 inch of letter height.

We need to know and show clearly and simply what the privacy policies are on sites we design and visit. McLean's Magazine's Jesse Brown reports on a system of icons that can simplify and our understanding of a site's privacy policies.

This site develped by students at Yale will allow youto generate code to place ICONS on your site to alert vistors about your privacy policies.  Take a look. 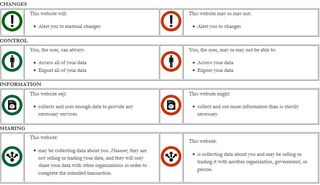 Goldsworthy, your ideas have morphed to books

Have any remainders around you want to make art with? 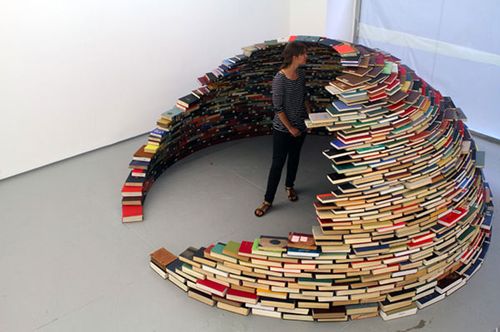 For Librarians already in the center of controversies about the survival of the idea of the 'Physical Library', this piece from Forbes by Eric Jackson, Here's Why Google and Facebook Might Completely Disappear in the Next 5 Years will give you even more to worry about.  It touches on how "Baby Boomers behave differently from Gen X’ers and (now we are seeing) additional differences with the Millennials."

Mr. Jackson starts to think about the differences and possible future when looking at:

let's have a lot of fun today

It is my belief that I create and learn and produce better things and ideas when I have fun.

The fun is just for itself.  The ideas that result can be for others' benefit too.

Here are adults having fun.  Wish I was one of the team.

Start with the first machine

and go to the second and most recent...