PLAN22 Archibrarians
Archives ALA AC18
X
Welcome to our PLAN22Archibrarians website. We help you to: Talk to Architects; Begin your Library Building Project with your data; and Achieve the Library your community requires.

How are you going to affect changes and responses to global catostrophe at your Library? 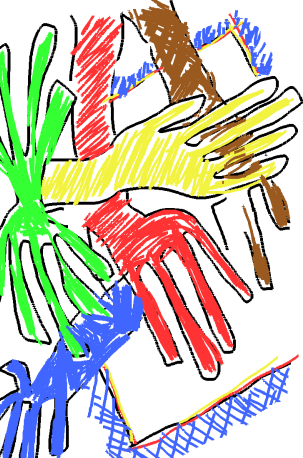 We are still here.

Are you still there? Have you survived? Have your family and your colleagues made it though Covid-19?

We are thinking about how excellence in design can help you plan changes as your re-open and adjust your policies and ways of working.

Let us know how we may help. 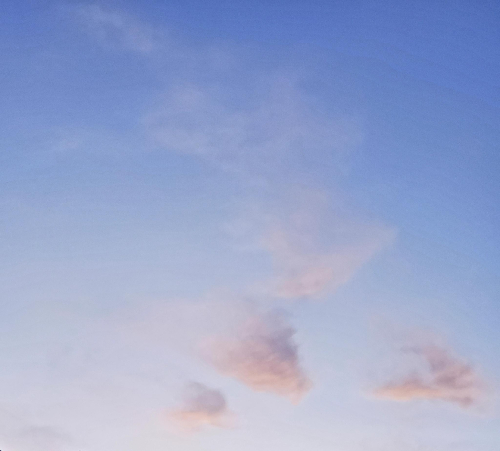 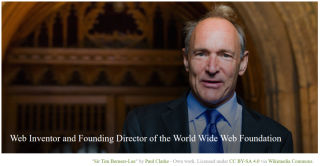 “Freedom is found through the portals of our nation’s libraries.” - David McCullough, Speech at the Library of Congress about his book on John Adams, aired on C-Span, June 10, 2001.

Americans go to school, public and academic libraries more than three times as frequently as they go to the movies.

There are more public libraries than Starbucks in the U.S.total of 17,566 including branches.

Nearly 100% of public libraries provide WiFi and have no-fee access to computers.

In 2013, there were 1.5 billion in-person visits to public libraries across the U.S., the equivalent of more than 4 million visits each day. That’s 2,854 per minute.

Public, school and Academic Libraries are essential to the health of democracy.

Ask your librarian how to find any topic that interests you - they will find it for you and help you find even more.

Click on these images for bullet points in free PDF format:

More info at this link: 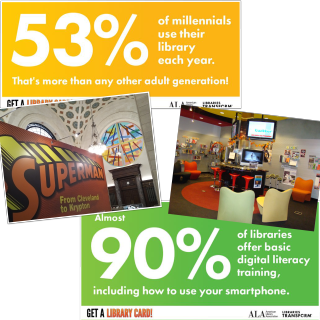 Posted on Monday, 17 September 2018 at 04:29 PM in ALA News, Articles about Libraries, FINDINGS, Libraries and Social Networking, Research, the Library in the Community | Permalink | Comments (0)

Are people excited to see what's happening in your library?

How do you market your library and services to your community?

Looking for ideas to bring engaged students to your library this Fall, and more users to your community library?

Take a look at this colourful, visual-story link. Looks like fun...

"What Your Teacher Librarians Can Do For You.... A Program & Ticket For A Successful Year!" ... 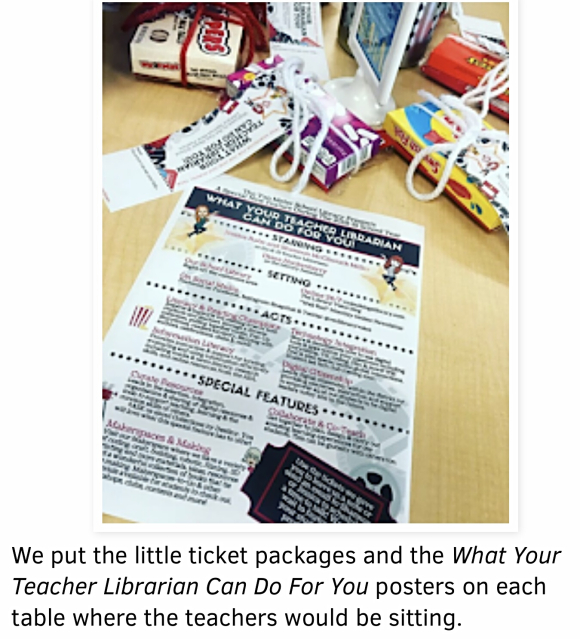 Posted on Thursday, 23 August 2018 at 10:18 AM in Advocacy, Articles about Libraries, Libraries and Social Networking, LIBRARIES TO LEARN FROM, Library Marketing, the Library in the Community | Permalink | Comments (0)

We are researching the topic of how librarians can plan for the future in their libraries. In architectural school, the "Environment' and "Environmental Design" were at the root of all my design considerations. Most of us in class thought, "We've got this. We can be agents of change for good. Our values and caring for our planet through intelligent design are going to help everyone."  The "Almost" in the title of the following intensive and exhausting-to-read (for me at least!) article sums up the results of our youthful, optimistic dreams.

This is this a photo of weekend's New York Times Magazine cover, stark white letters on unrelieved black, small enough to make you really look and read. The exclusive Two-Part issue of August 1, 2018 - Losing Earth: The Decade We Almost Stopped Climate Change - is so overarching a topic that it must be considered by all community leaders as they try to plan for services that are foremost on their users' minds and strive to meet just their basic human needs.

The publication clearly and in plain words puts before our eyes for all to see, the feet-of-clay history of what we have done since we were all warned that climate change was real and how it could affect our lives.

Our global climate affects our jobs, our health, immigration intensity, food and water supplies, demand for science-literate citizens, our power supplies and the willingness by our community's institutions to embrace adaptability. We have no exact idea how this issue will devolve but one thing is certain; it will and we must consider our environment in every decision we make when planning our libraries. 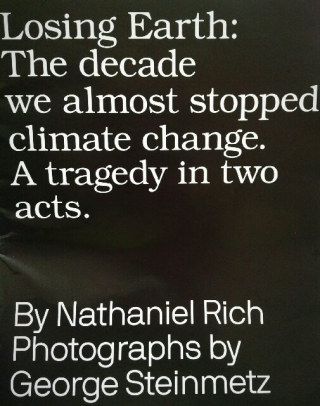 The chapter titles of Part One are riveting. As you begin to read Part Two, you'll get the drift of where this is headed.

Here is the link to the full on-line publication (with awe inspiring photos).

Posted on Monday, 06 August 2018 at 10:48 AM in Environment&GlobalWeirding, Geography/Earth Science & Libraries, GREEN, International Community, Libraries and Politics, Libraries and the Environment, Planning the Library, Reinventing Your LIbrary, Research, the FUTURE of Libraries | Permalink | Comments (0)

Shout out to all of you at #alaac18 who attended our Presentation. #in #fbp22 @goRCLS

Thank you everyone #alaac18 for coming to our presentation.

If you have questions after you receive our NOTES, we will happily assist. Posting them within a week the ALA Conference Sessions Postings site.

Posted on Saturday, 30 June 2018 at 01:38 PM in contact us, Librarian-Building Project Leader, PLAN22 NEWS BULLETIN, Planning the Library, Reinventing Your LIbrary, the FUTURE of Libraries, the Library in the Community, WHAT WE DO, Workshop News | Permalink | Comments (0) 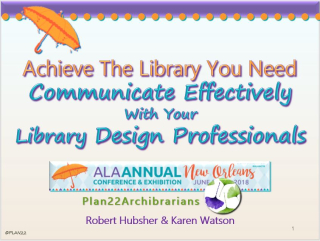 Working full out finishing up our Program for the American Library Association Annual Convention (ALAAC18) in New Orleans - Saturday, 23 June.

Posted on Tuesday, 05 June 2018 at 12:28 PM in ALA News, ALAAC18, DESIGN, PLAN22 NEWS BULLETIN, Planning the Library, projects, the FUTURE of Libraries, the Library in the Community, Webinars on line, Workshop News | Permalink | Comments (0) 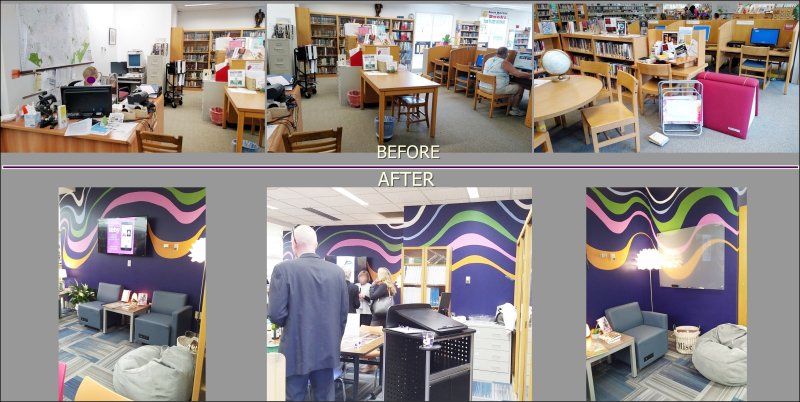 The project was done with a minimal budget and LOTS of volunteer time and materials.

It is great to see how much can be done to make a space function well and be warm and welcoming using engaging paint colors and patterns; space defining carpet tiles; well chosen data/electrically connected seating; functional furniture; the occasional piece of mood lighting and oh yes, lots of love for the users!

A Childhood Book Casts a Long Shadow, A Letter of Thanks. @JFOppenheim #in

A lesson well learned about appreciation and how people's contributions affect us.

This article is directly from  Joanne Oppenheim's blog: (our amazing friend and author) 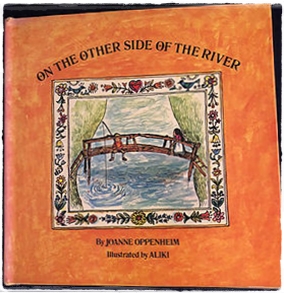 Writers of children’s books often get letters from children “by-the-class-full”—letters that teachers have their students write. I always enjoy those, even when I know they were written on assignment.

What we don’t often receive are letters from former children...letters that say a story written decades ago lives on. Last week, I received such a note, an email that should remind us, that the stories shared with children can cast a long shadow. Here is a very special email (shared with the author’s permission):

I am writing to you about your book, The Other Side of the River.  I remember buying the book when I was 4 or 5 and it quickly became one of my favorites.  The book is exactly what popped into my head this morning when a friend posted this article on facebook:

Obviously, this situation is not a case of an actual bridge falling down but the basic lesson of how important it is to really think about how we are connected to one another and to have respect and appreciation for others’ contributions – that feels like a lesson I’ve known for so long because of this book.  I ordered a copy today for my almost four-year old son, and I am really looking forward to reading it with him.

Thanks so much for your work!

Joanne goes on to thank the writer of this lovely letter:

My thanks to Helene! How grand it is to discover that a story published so many decades ago is fondly remembered. Even more, that it still resonates and says something meaningful about our need for each other. Of course, the book is now out of print and only used copies are available. Who knows, maybe it’s time for a reprint in English. Oddly enough, in 2017, Tuttle, a Japanese publisher reprinted the book in Japanese. You never know.

On the Other Side of the River, was published in 1972 by Franklin Watts. It’s one of those publishing stories that should comfort writers who get rejection letters—in other words, all writers. After submitting the story to several publishers, I put the manuscript away in my desk. A year later, an editor called to ask if the script was still available. She explained that she loved the book when she read it originally, but she was not then in a position to buy it. Now, she had become the senior editor at Franklin Watts and hoped to do the book with the talented and well-known illustrator, Aliki.

Sadly, my own copies of the book were lost in a fire several years ago and the copy in the photo above was generously sent to me by Aliki. It is a personal treasure.

Back in 1972, the book was well received in the US and was even far more successful in England, France, Germany, Sweden, Denmark, and Japan. Perhaps the theme, the interdependence of people, was more meaningful abroad. 1972 was the year that Nixon visited China and I remember wanting to send him a copy to take along. Children’s books are not supposed to carry heavy messages; that’s what publishers and editors always say. Maybe not, but I think memorable stories are more than entertaining. They also say something to meaningful to our hearts. Like Helene, I believe that the idea of our interdependence is one that we need to share with each other and definitely with our children and grandchildren.

Thank you for sharing this Joanne. We never know who is thinking of us or the effect we can have on people whom we may never even meet. For our part - we are fortunate to have met you!

next topic
Tweets by @2plan22